Lars Dittrich and André Schlechtriem are pleased to present NO JOKE, the revolutionary collaborative series by Roger Ballen and Asger Carlsen. The self-contained series of 37 black-and-white photographs premieres in its entirety during Berlin Art Week, opening September 16 and running through October 22, 2016. A significant follow-up presentation has been selected to be featured at Paris Photo 2016 in November.

At the core of each artist’s practice is an interest in the subconscious and a skilled investigation into the complex worlds of the archetypal outsider and the preternatural. The collaboration examines the artists’ relationship with the human body and mind. This position is perhaps shaped by displacement, inherent disconnection, and an insatiable desire to construct and communicate this aesthetic, specifically through the processes of photography.

Self-described outsiders—Ballen, born in New York in 1950, now lives in Johannesburg; Carlsen, born in Frederiksberg near Copenhagen in 1973, now lives in New York—the two artists established a long-distance collaboration in 2013. Based on their shared conceptual foundation, Ballen and Carlsen began exchanging information and digital files exclusively over email and Skype. Images were parleyed between the two artists over the course of several years. Manipulated, enhanced, layered, and drawn over with each pass, they turned into enigmatic photo-collages fusing advanced Photoshop and digital processes, analog cut and paste techniques, and illustrations.

Not unlike the Surrealist cadavre exquis, though more deliberate, this collaborative exchange nurtures and challenges both artists’ practice, creating fertile ground for the truly original to occur, something satisfyingly awkward and uneasy. As the artists expressed it in a recent interview with Office Magazine, “If you can define an idea with words then you can get rid of it. You can package it and put it in a supermarket. But if the art is indefinable it is more powerful in the subconscious, the subconscious can’t figure out what to do with it so it turns it over, turns it over, turns it over, trying to come up with some relationship to it … So the work should have that aspect of not being easily placed. If it’s too easily placed, it has no impact.”

The gallery will have extended hours during Berlin Art Week, Saturday & Sunday, September 17–18 September from 11am to 7pm. The gallery will publish a complete catalog on the occasion of the exhibition. Please contact Owen Clements, owen(at)dittrich-schlechtriem.com/old/old, for information and with any further inquiries. 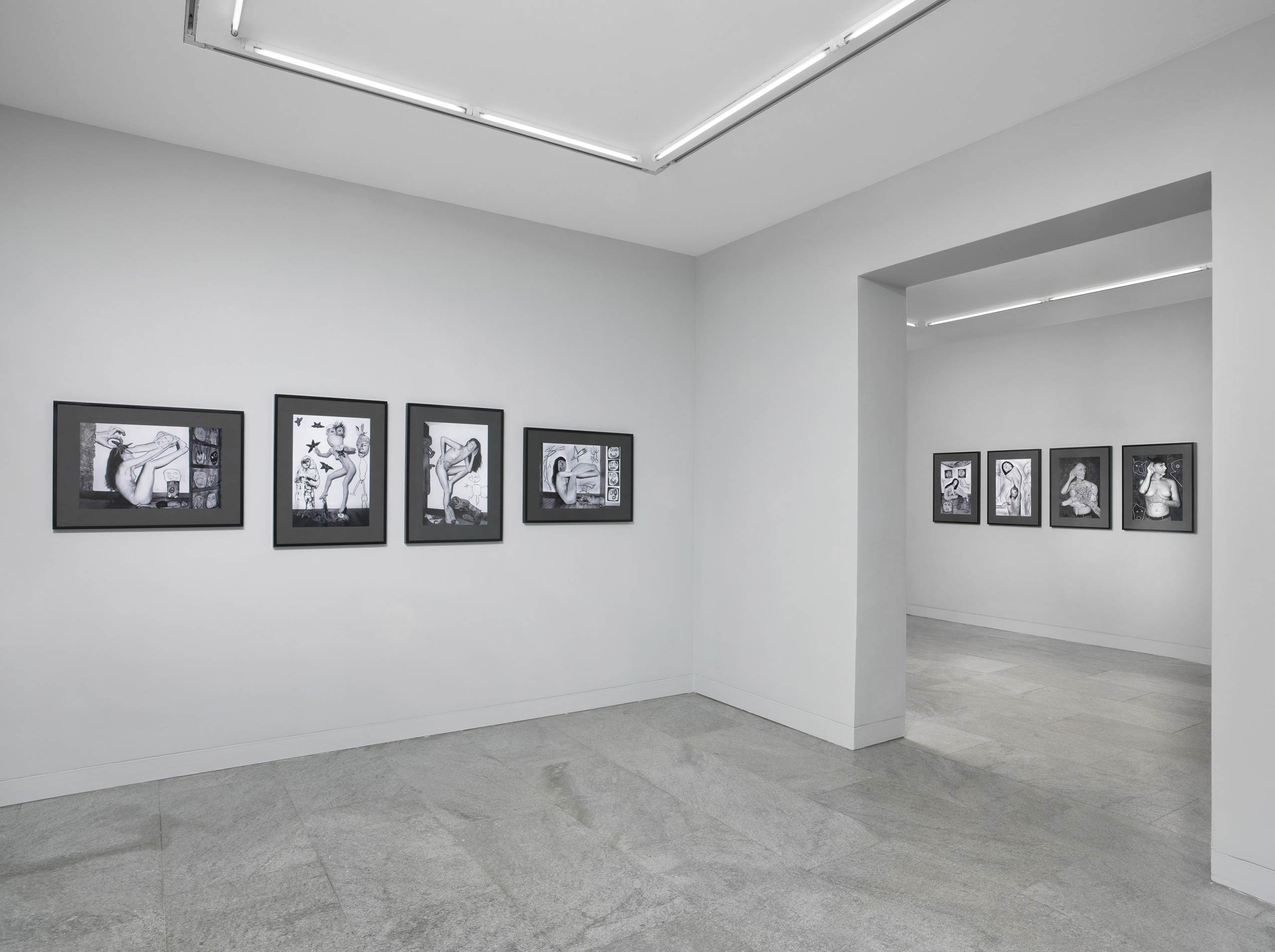 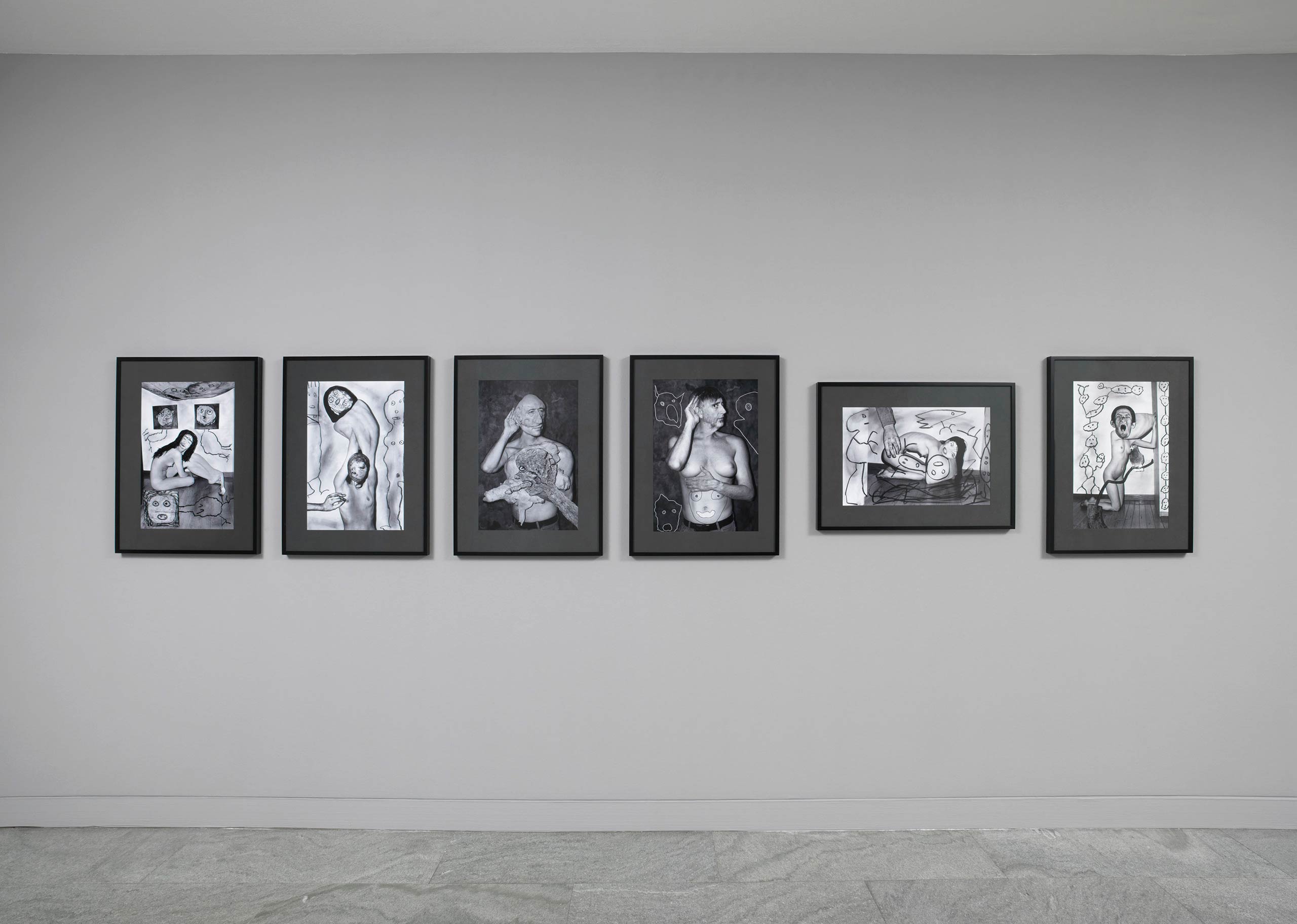 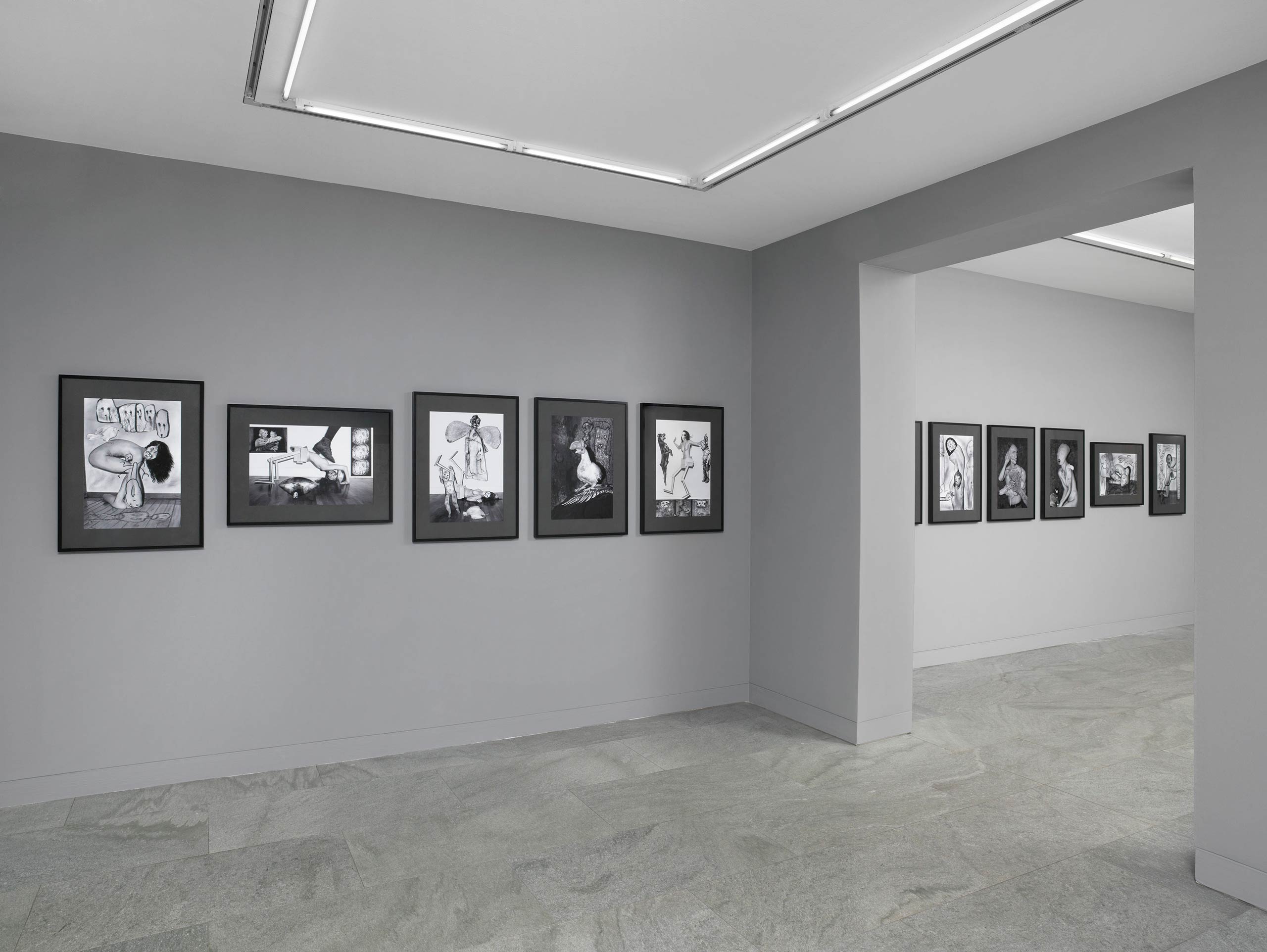 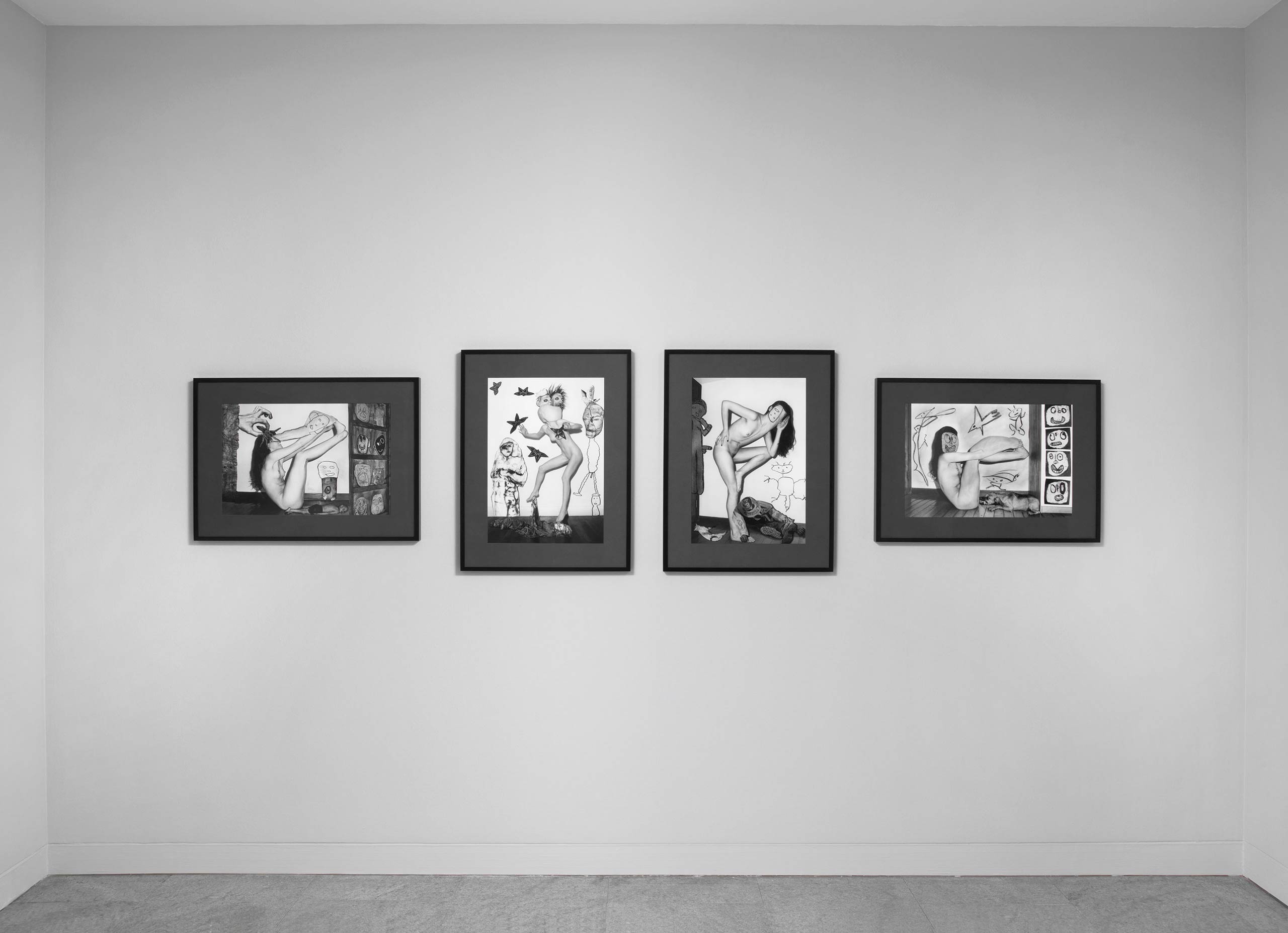 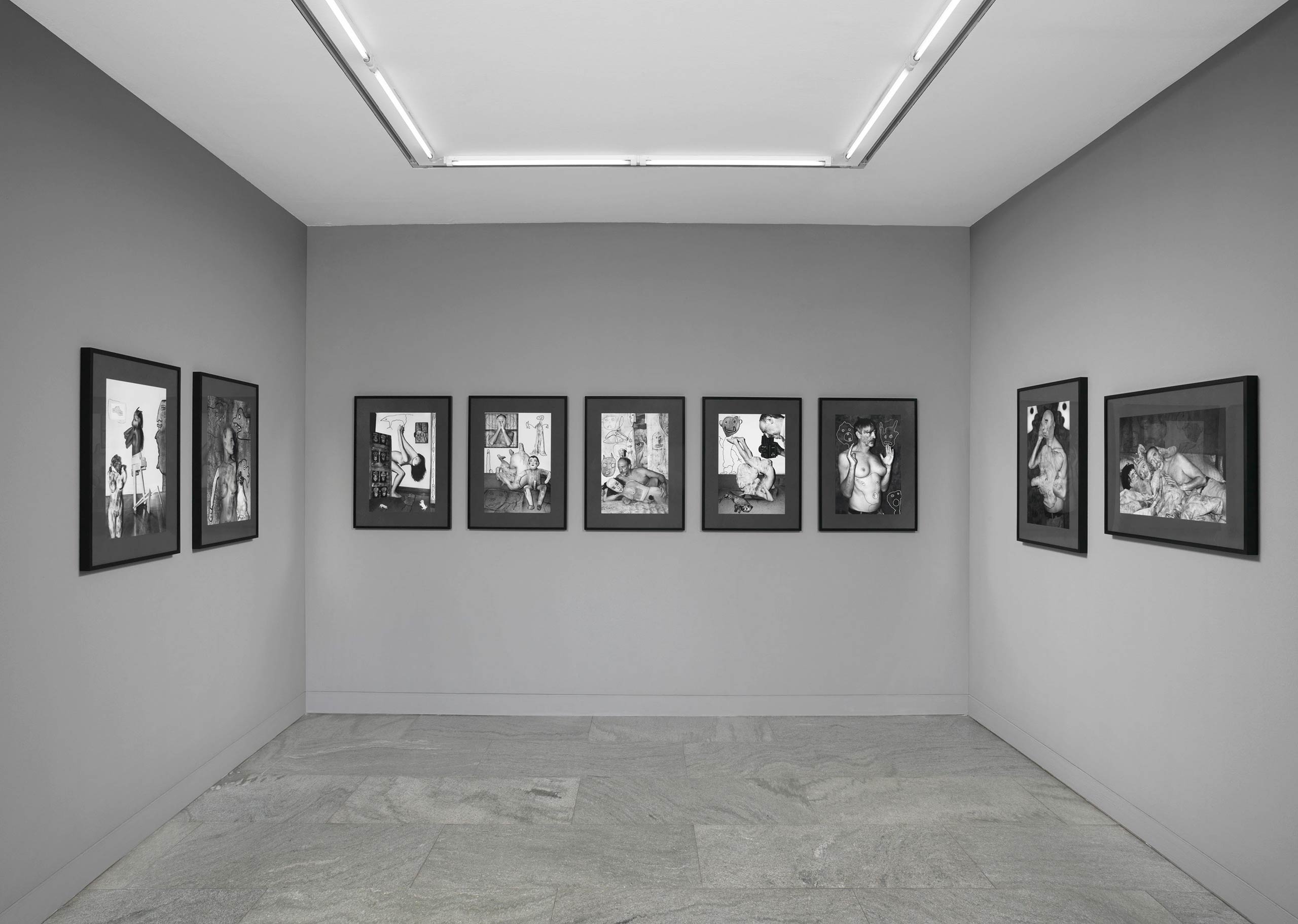 Abracadabra,
I sit on his knee.

Presto chango,
and now he is me.

Hocus pocus,
we take her to bed.

The self-portrait “Carlsen and Ballen” marks the point of departure for the following reflections, and it is the key to “No Joke” (2016), a collaborative work by the American artist Roger Ballen (b. 1950) and his New York-based Danish colleague Asger Carlsen (b. 1973). A bare-chested Ballen sits on a stool. Gazing into the camera, he holds a dummy bearing Carlsen’s boyish features in his arm. The constellation of the puppet master with his creature on his lap recalls depictions of a very particular genre of popular entertainment: the art of ventriloquism. As David Goldblatt has pointed out in his essay on “Art and Ventriloquism,” the ventriloquist is a very peculiar and allegorical figure. He lends the lifeless doll a voice that is a defamiliarized and bizarre version of his own. In his act, the puppeteer listens intently to his puppet to create the semblance of a lively exchange: he listens to himself and to his own creation as a third party. The lines demarcating who says what and who is what are blurred. Yet the dummy that also appears in the matching piece “Puppetry” is more than a mere placeholder, a proxy for imaginary selves and others. Ventriloquism has its root in religious rituals in ancient Greece; much later, the ventriloquist’s performance became an integral part of the nineteenth-century variety theater [fig. 1]. Meanwhile, the art of ventriloquism has always also been a medium of vocal indirection that allowed parallel worlds to emerge. The act may be funny at first, but the dummies and the worlds they beckon us into are sinister. In the psychological thriller “Magic” (1978), Fats, a dummy in a plaid shirt and dungarees with an aged boy’s face that Corky Withers, played by Anthony Hopkins, hopes will help him break into show business, soon awakens to an uncanny life of his own [fig. 2]. His antics eventually throw the roles played by the movie’s human characters into utter confusion.

The parallel worlds that Ballen and Carlsen sketch are sinister, grotesque, macabre, monstrous, and—depending on your tolerance for pain—repulsive. It looks very much like the artists deliberately lost control over their creations. The collages are composed of bodies and body parts, of animals and cadavers, of puppets and what would seem to be prostheses or melting constructs. The creepy intimacy of the spaces they depict is hinted at by the elements that circumscribe them: there are no windows, and the walls are hung with fabrics, blinds, and pictures. Lateral wood panels and pieces of furniture or beds often add to the sense of confinement. In a superadded layer, crude drawings inhabit the imaginary scenes. Depictions of hideously grimacing ghostlike visages and contorted bodies have been scrawled on the walls, on naked skin, and even over the figure’s faces.

The naked body—a young woman’s, a mannequin’s, the artist’s own—stands at the center of the compositions, the pivot around which a diabolical theater spins into action. Not one of the human bodies is left inviolate; arms, legs, faces are missing, and digital editing has spawned disproportioned amalgamates, stretching and morphing the bodies and complementing them with incongruous movable pieces.

Etymologically speaking, the monster, Latin monstrum, derives from monstrare, to show or reveal; the ultimate root is monere, to warn. The philosopher Stephen Asma has argued that the monster may thus be understood as a sort of omen, a warning. But a warning of what? The presence or depiction of monsters is profoundly disturbing because, in a “normal” world, they must not exist. They are symptoms of a malaise and reflect our deepest fears as well as fantasies. They are always avatars, or antitypes, of ourselves and how we see the world, or else their horror would be ineffective. How easily that horror is provoked, how powerful the images are, exposing the fragility of the beholders, is in itself shocking: in “No Joke,” the manipulation of the naked female body and the grotesque concerted performance of the pictures’ elements are appalling even as the compositions are manifestly—and, one assumes, deliberately—artificial. A pigeon, a chicken, a crow setting its claws down on naked skin, deformed or mutilated features, disturbingly exaggerated children’s drawings. The sutures of the digital collages and the different artistic materials are always visible, insistently reminding one of the synthetic nature of these parallel worlds. Look here! Ballen and Carlsen overdrive the effects, pushing art into perversion and the viewer to the outer bounds of experience. “The monstrous,” the writer Timothy Beal has noted, “is an embodiment of overwhelming and chaotic excess, a too-muchness that brings on a vertigo-like sense of fear and desire: standing on the threshold of unfathomable abyss.”

The monstrous imagination is as old as humanity itself; monsters are cultural through and through. What is regarded as monstrous in any place and time is defined by the prevailing idea of what is normal. So the depictions of monsters and behemoths of the sea in historic maps like the 1539/1544 Carta Marina [fig. 3] or the aliens and post-human cyborgs of contemporary culture always bear the index of the historic situation of their genesis. Which norms do they point up or critique? What can be represented, and what are the limits of representation? Are their even any limits?

The visual arts have answered these questions in a variety of ways. Francisco Goya’s Desastres de la Guerra, a series of black-and-white prints created around 1814 but not published until three decades later, shattered the image of war as heroic by depicting butchered, raped, lynched bodies hovering along the boundary between this world and the hereafter on both sides of the frontlines. Inspired by the art of mental patients and children, the paintings of Jean Dubuffet, a leading exponent of postwar Art Brut, expressed a radical rejection of the elitist standards and hierarchies of art history and the art market. In the 1980s and 1990s, Abject Art, represented by Cindy Sherman, Louise Bourgeois, and others—Julia Kristeva’s groundbreaking “The Powers of Horror: An Essay on Abjection” (1982) provided the theoretical underpinnings—took aim at the imagination and interpretation of the female body and the visualization of patriarchal power relations.

A generation separates the two artists who collaborated on “No Joke,” but, each in his own way, they both operate in the terrain of the abject, which appears to be experiencing a minor and decidedly male revival; see also the work of Paul McCarthy and Ryan Trecartin. The parallel worlds of “No Joke,” however, are constructed in a very distinct fashion, their aesthetic informed by the material and media the artists employ. Both Ballen and Carlsen are committed to black-and-white, a classic photographic aesthetic. That is significant because the different textures and physical qualities of the visual elements they use or create play a major part. Color would be merely a distraction. What matters are the consistency and tactility of skin, flesh, and body hair, the sculptural effect of hands, feet, torsos, muscles, and sinews, and the aesthetic of the charcoal or crayon dash as it contrasts with the roughly crosshatched or smudged surfaces. The picture “Up and Cover” illustrates the function of the photographic camera and the choice of photography as an artistic medium. Once again, Ballen himself appears in it, training his camera, a medium-format Rolleiflex, on the action playing out before him. He is the author of the scene and its spectator in one person. By virtue of the connotation of veracity with which we continue to credit the medium, the photographic act authenticates the picture regardless of how constructed and jumbled it may seem. Carlsen is a virtuoso of image editing, and the series “Hester” (2013) solidified his status as a role model for today’s youngest photographers, who have no reservations about availing themselves of the full range of creative possibilities opened up by the synthesis of photography and digital technology.

Ballen and Carlsen’s pictures reflect the dark recesses of the digital imaginary. They may have much more in common than we think with historic depictions of sea monsters and the fears and fantasies of the people who explored unknown territories. The existence of monsters was common sense when nothing or little was known about the world. But do we today actually know that much more? In light of the splendid promises of the digital world, in the age of biometric data, Final Fantasy, body optimization, ISIS, tissue engineering, and Game of Thrones, we should perhaps not be so sure.

Abracadabra,
I sit on his knee.

Presto chango,
and now he is me.

Hocus pocus,
we take her to bed. 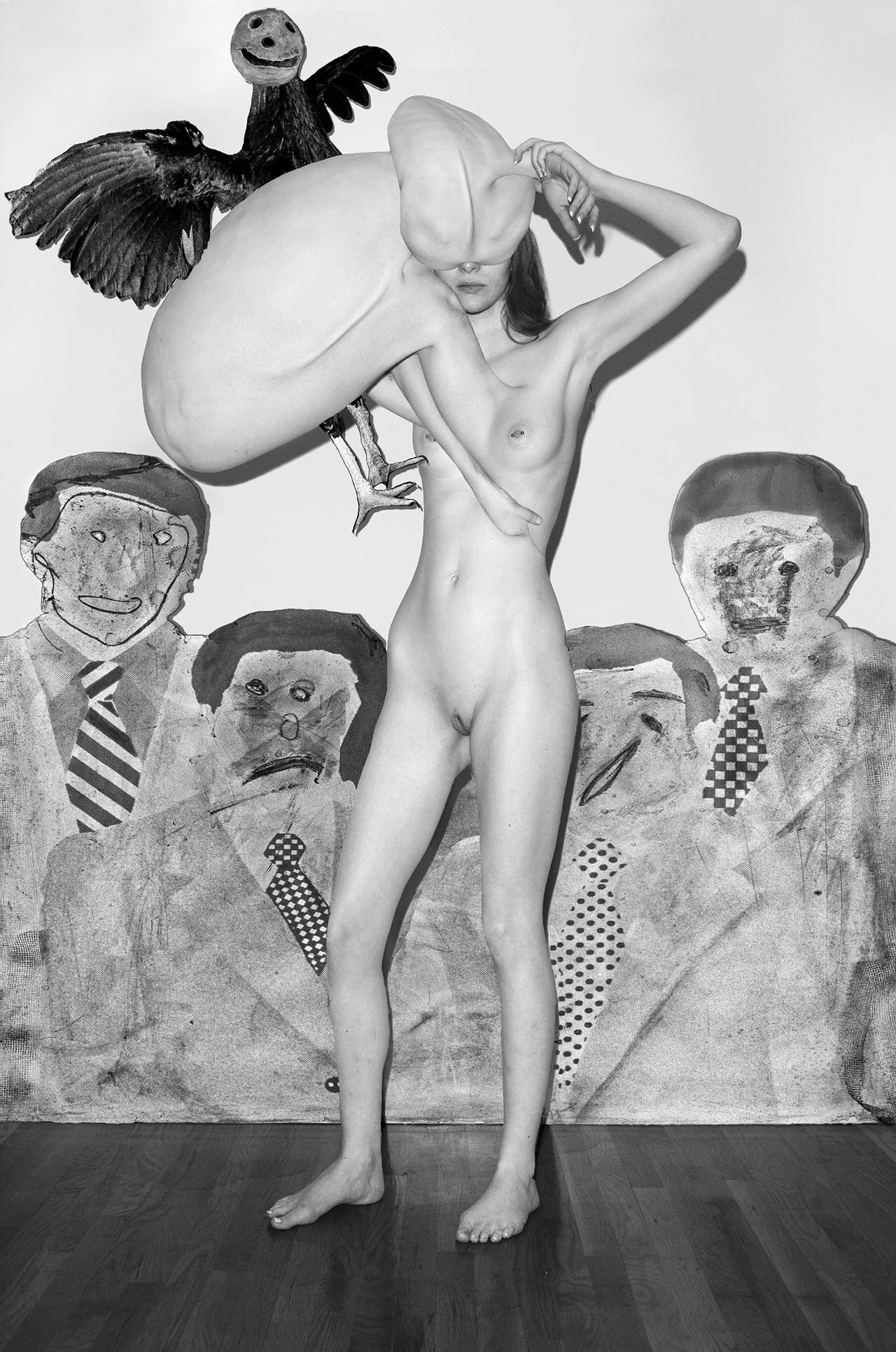 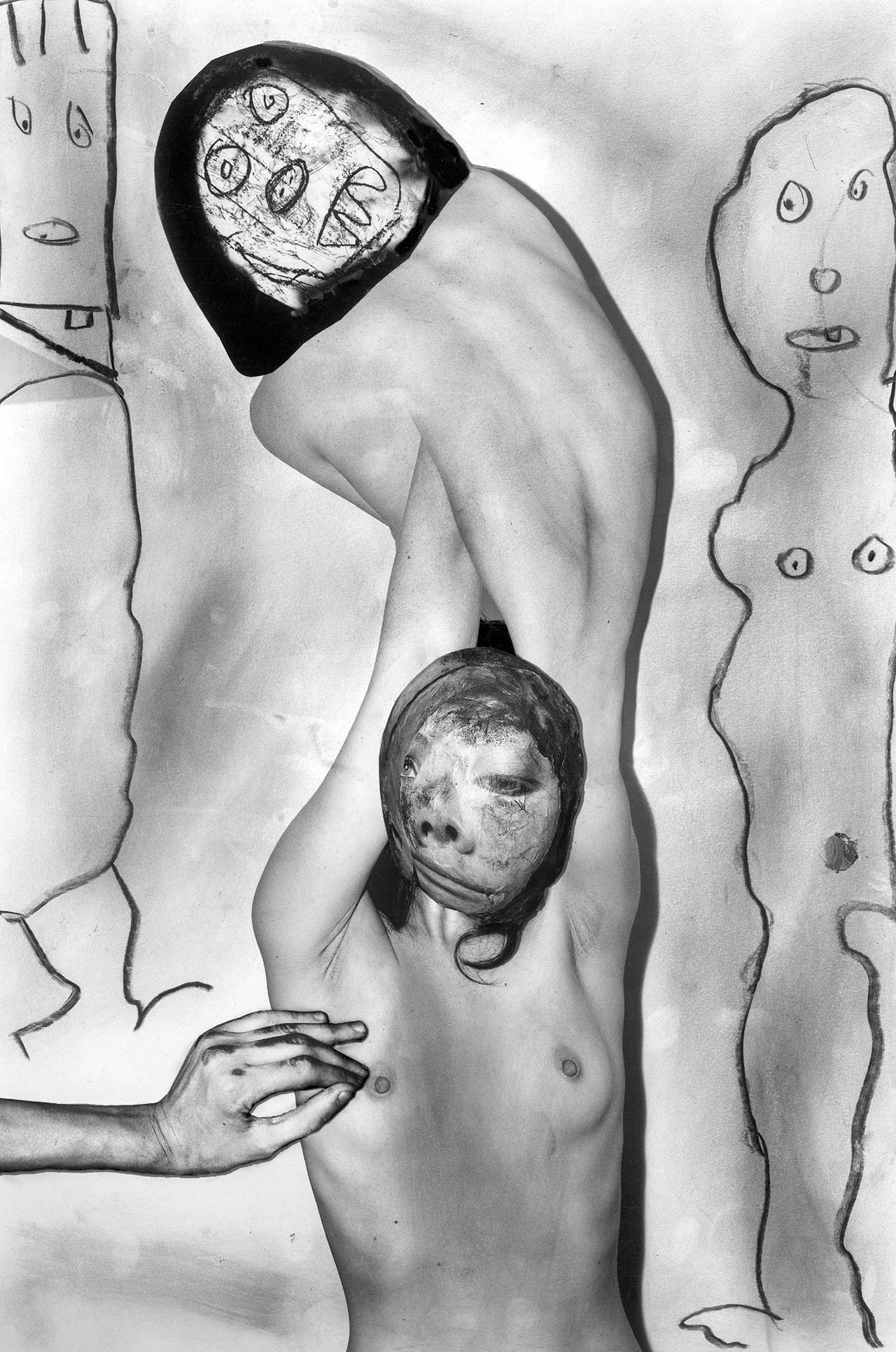 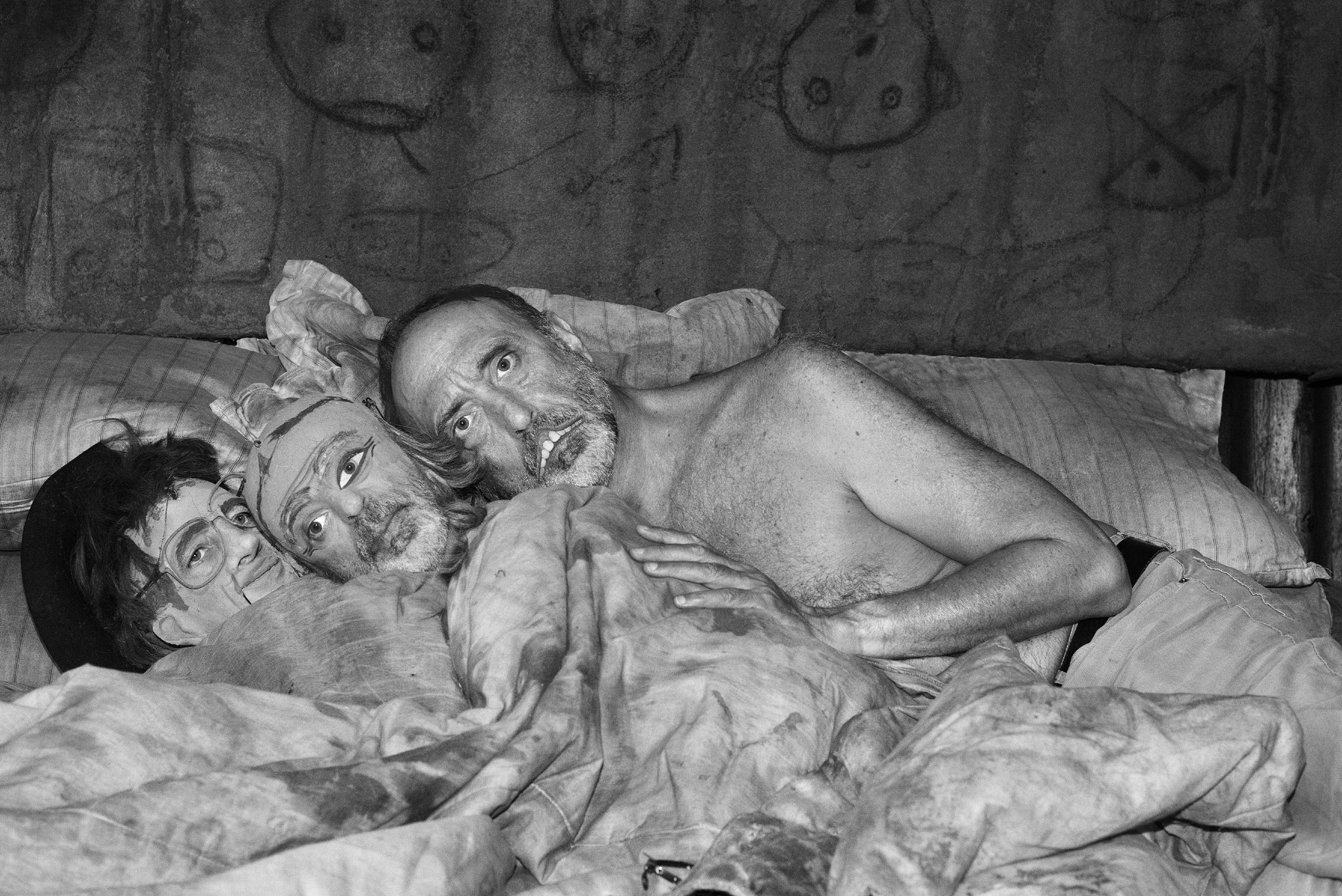 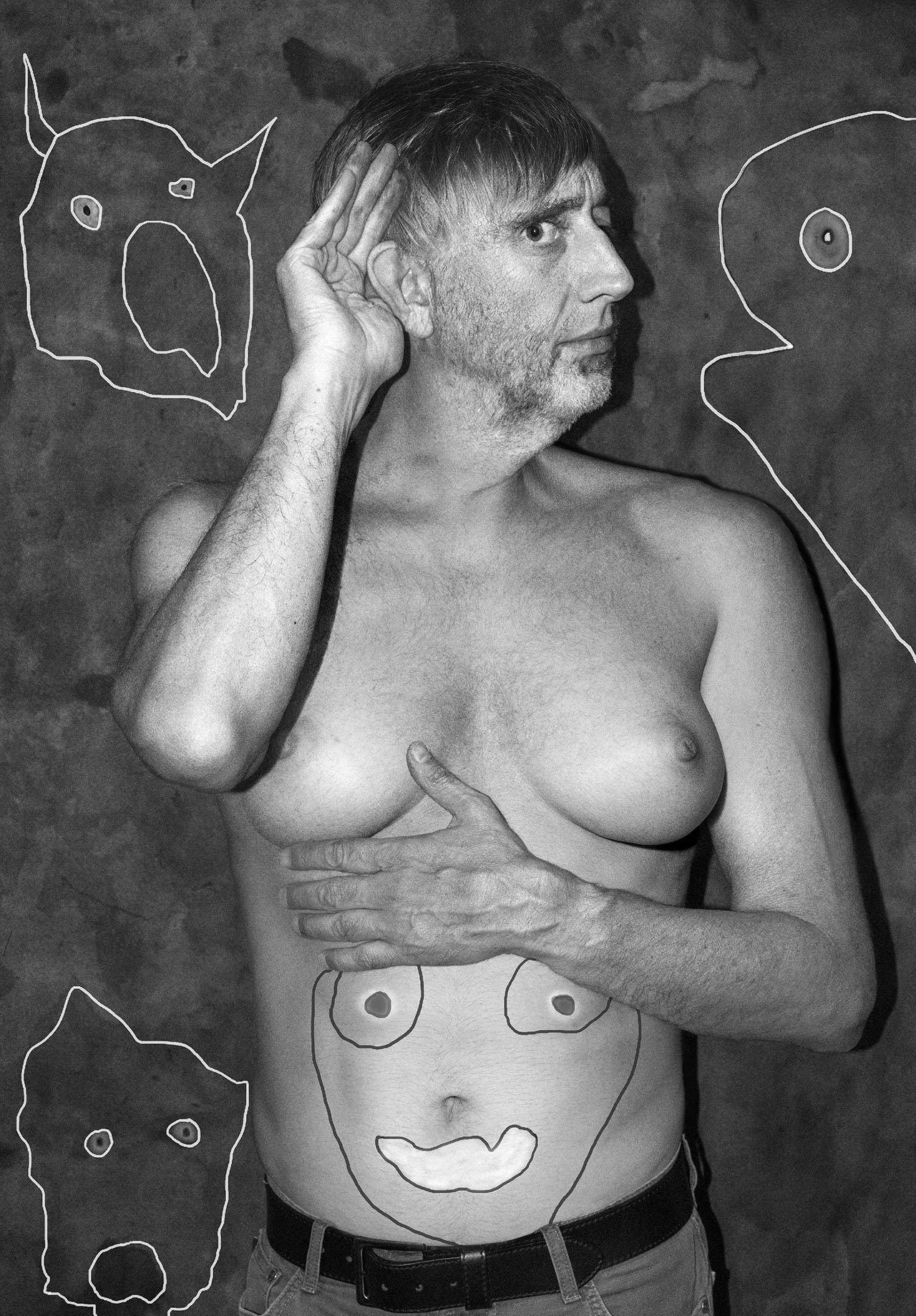 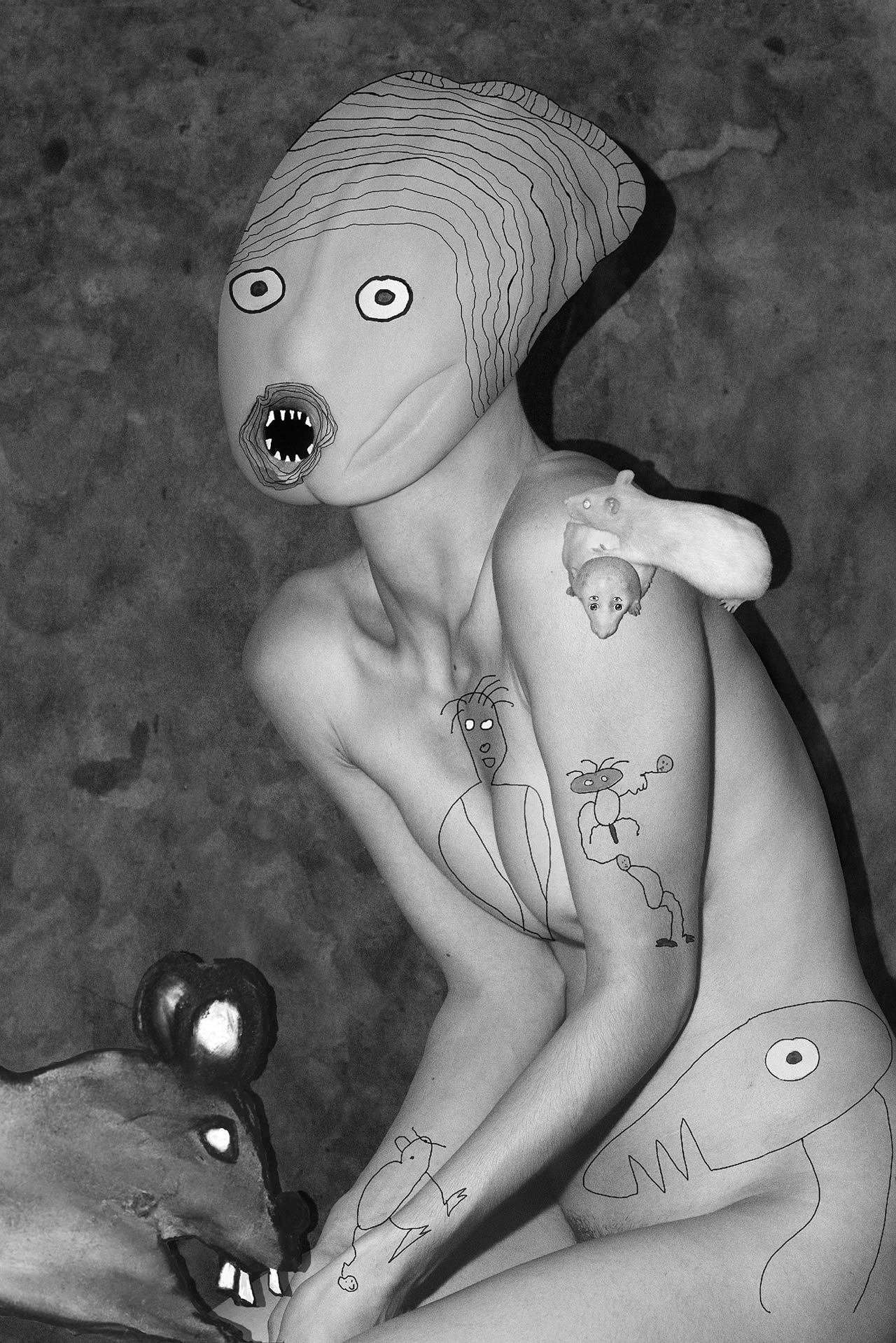